Wexford town has several schools which have made strong progress in An Taisce’s Green-Schools campaign. Well done to Wexford’s St Iberius National School on securing their 2nd Green Flag, this one for reducing energy usage. Read what the Wexford People had to say about it. The Mercy School, John’s Road has received its 6th Green Flag for “Biodiversity” while Scoil Mhuire has bagged its 5th Green Flag, also for “Biodiversity”. Other schools with multiple flags are Kennedy Park N.S., St. John of God, The Faythe, Loreto Secondary School and St Peter’s College.

Congratulations to the 2013 Wexford in Bloom Competition Award Winners. Thank you to all the schools for taking part and for making the 2013 competition an excellent year with such a high standard provided from our entries.

Mercy School was the Platinum Award winner. This was a tremendous achievement for such a new garden and it is a testament to all of the hard work of the students, volunteers and Stephen the caretaker. The “An Gairdín Glas” garden was designed and planted by Betsy Hickey and James Ginnell. The project was supported by the Parents’ Council and the EPA. Since winning the award the Green Schools Committee, led by Ms. English and Ms. Hughes, have ensured that the garden has been nurtured and maintained to the point of perfection! Community artists have worked with the children to produce amazing works of art which you can find around the garden. Also well done to Ms McKiernan and her 5th class students of the Mercy School, for constructing a very fine and spacious insect hotel. The new 5 star structure is situated in the award-winning Gairdín Glas garden. 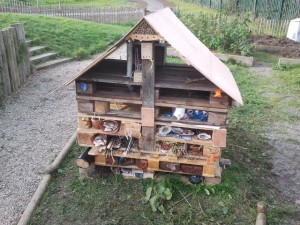